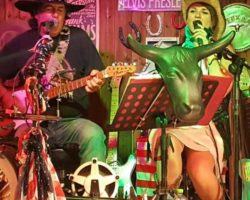 The first and only Country Two Man Band in the world, they are two… but they play live 6 instruments simultaneously.
With many concerts performed and 4 self-produced cds, the Tex Roses are by far one of the most impressive and desired band of all time.
The band was formed in 2000, with the idea of merging traditional country-bluegrass with modern sounds and rhythm, unusual for this genre. From that time a real explosion has come out, a series of concerts everywhere… a great success!